Protect Your Trees From Insect Threats in Massachusetts

Trees.  Emerging spring buds bring hope, their leaves in summer give shade and the kaleidoscope colors in fall rival those of a painter’s palette. 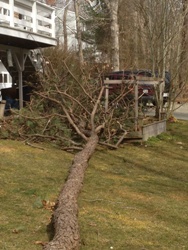 A spring windstorm takes down a turpentine beetle infected tree on Cape Cod.

Trees are not only an important part of the beauty of our landscape but they are vital to our ecosystem.  They provide oxygen for all living things and a habitat for animals.  Some produce fruit or nuts which are important food sources for both humans and animals.  But what happens when the tree itself becomes the food source?  Without proper treatment, pests can severely compromise the vitality of trees. Pests that might not kill a tree can weaken it enough that secondary pathogens will.  These threats can also spread to and infect healthy trees. It’s an ongoing cycle. Property damage and personal injury are a risk as compromised trees are more susceptible to dropping limbs or being blown over or uprooted by adverse weather.  Three pests of immediate concern for trees in our region are Winter Moth Caterpillar, Hemlock Wooly Adelgid and The Turpentine Beetle.

Winter Moth Caterpillar: It starts with moths in flight in late fall and early winter. In early spring, your car is covered with pin head sized pellets, the air smells like a litter box and when you walk through your yard, it’s like walking through cob webs. Then you see the culprit, that all too familiar nasty green inchworm.  Like many invasive species the Winter Moth is not native to the US. Its origins can be traced back to Europe, where due to numerous natural predators and parasites, its affects were never as devastating as they have been in the northeast United States. After multiple years of attacks from not only winter moth but forest tent caterpillars and gypsy moth in the mid 2000’s, excessive defoliation is taking its toll and many deciduous trees (primarily oak) are showing signs of serious decline.   Many trees have died in southeastern Massachusettsover the last 3 years from the stress of this defoliation coupled with drought and other factors. Multiple years of defoliation weakens trees to the point where secondary agents, also known as “weak invaders” can overcome what is left of a tree’s natural defenses, killing the tree. Scientists are experiencing great success in controlling the population, through the use of a natural predator Cyzenis Albicans but Winter Moth persists and scientists are predicting severe defoliation in pockets in pockets in 2012.  To combat winter moth early spring horticultural oil is an excellent practice.  By coating egg masses before they hatch, population is decreased.  A follow up treatment to control populations that did hatch or migrated via wind and rain is suggested a short time later.

Hemlock Wooly Adelgid:  This sucking insect was first identified in Massachusettslandscapes in 1988 having spread from an already existing infestation in Connecticut. Wooly Adelgid feeds on the hemlock by sucking sap from the twigs of the host plant.  Already compromised trees die within 3 to 5 years of infestation.  Healthy trees can live longer. This insect is atypical as it is very active through the winter and fairly inactive during the growing season. The pest is easily identified in its adult stage as it resembles cottonballs on the underside of hemlock needles.  Without treatment, mortality is certain.

Black Turpentine Beetle: This pest is one of the most common and serious threats to Japanese Black Pine and Pitch Pine in coastal areas of the Northeast. Pitch pines, which are known for being very tolerant of salt spray and harsh conditions, are being especially hard hit on Cape Cod.  Weakened trees emit a pheromone that attracts bark beetles. The beetles chew through the trunk of the already weakened plant to the vascular area, making the pitch flow out. Once that pitch hardens, the beetles re enter and once again, pitch flows out forming a pitch tube.  This continues until the all the resin is drained from the tree. The beetles generally colonize trees in the first 8 feet of the trunk so the tell tale holes and pitch tubes are easily identified and something homeowners should be scouting for. It is important for homeowners to removed dead or diseased trees from their property to be less attractive to these invasive beetles and avoid the hazards of falling trees and limbs.

The Greenskeeper Lawn, Tree & Shrub can identify and treat for insects and diseases that are a threat to the health of your trees. Treatment is more environmentally friendly and less costly than removal and replacement of dead and diseased trees.  If you think you might have damage from any of these insects or are concerned about the health of your trees, call The Greenskeeper Lawn, Tree & Shrub Service. Our knowledgeable staff will identify pests and present a plan that will have you enjoying your great outdoors for years to come.

← Pansies on Cape Cod!
Are You Ready for Spring Lawn Care? →